As it turns out, it takes me quite a while to get myself ready to write about a project I've completed. Almost a year later, just as I am getting ready to put this table back outside for the summer, I'm finally in the mood to show it off. Frankly, there is no real sense of major accomplishment for me with this table; as is the case with other tables I've built. It's all about best methods and practices (and practice is the key word there). The need for this table came from a storm that managed to break the glass on an outdoor table frame which my father and I have had for years. Rather than thinking about replacing it, and in the process mismatching a new table with our chairs (how could we dare?); I decided to put a wooden top on the already matching base. Luckily my father had purchased a decent amount of white oak from out local sawmill for other outdoor projects, so it was not too hard pressed to convince him that some should be dedicated to this project. The build itself was nothing short of basic. It was really all about joining a few boards together and making the top fit the base. A few rip cuts with a guide on the worm drive saw made quick work of getting straight edges. A few passes from my no.7 hand plane to joint those edges. Throw in a few biscuits (even a few at the ends to look like splines). Glue... Clamps.... Voila. A table top is born. The base was slightly rounded, so after laying the top on I marked the corners and rounded them off with a jigsaw and a sander. For the most part, this was the grunt work, and really the hardest part about it all was moving the boards around... and then moving the assembled table around. Luckily I have enjoyed a certain amount of daily weightlifting to help overcome these kinds of issues, but there are no handles on tabletops like there are on dumbbells. As for the finishing, this is where I was able to make one thing more interesting for myself. First off was the general process of making the table smooth, which was done with sanders and hand planes. Not particularly special except for some special knots. Knots, which I decided doing epoxy fills on, as a way to experiment and practice. This was something I was not well versed in... Luckily though, things went alright, and the finish itself was just a process in applying 7-10 coats of a spar urethane, giving it a nice golden color and a slightly plasticky surface which as soon as the weather hit it for a season, began to feel and look like real wood again.

That being said I wonder if that means needing to add more finish soonish.... 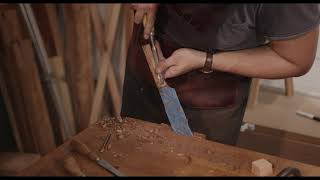 Making a Knife Handle from Albizia 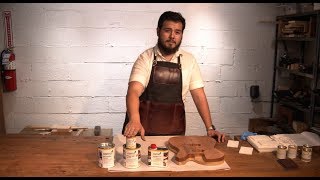 I did a video!

Making a Knife Handle from Albizia 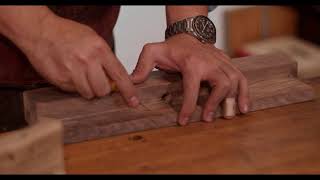 Another Video! Making a Walnut Key and Mail Holder

I did a video!

Things I am up to right now...